What is internet law?

Are you trying to learn more about internet law? It’s hard to imagine what the world would be like today had the internet not been invented. In a few short decades, the internet has revolutionized everything from politics to dating to publishing to commerce to banking, spawning multi-billion-dollar industries that didn’t even exist in the imaginations of the most insightful science fiction authors of the 20th century. But the online world was for a long while a sort of digital wild west, a lawless place that governments are still trying to tame with laws, rules, and regulations.

Internet law touches on the topics of cyberlaw, privacy law, data protection, contract law, intellectual property law, and free speech. Every website owner and e-commerce company needs to be aware of the laws.

But what is internet law? How do countries around the world use public policy to regulate online behaviours of citizens when the internet, for the most part, essentially knows no borders?

It was back in 1995 when Newsweek magazine famously published an article about how the internet was nothing but a “trendy” and “oversold community.” The article’s incredibly bad predictions included casting doubt on just how revolutionary the internet would be, the author calling it “baloney” how online technology would allow for telecommuting workers, digital libraries, online classrooms and streaming city council meetings.

In addition, the Newsweek article said online databases couldn’t replace daily newspapers and that his local mall did more business in a day than the entire internet did in a month. Moreover, the author doubted the internet could “change the way government works,” while also claiming digital books would never replace hard-copy tomes because trying to read electronic books was an “unpleasant chore.”

The article stated that what we now know as e-books, widely read on Kindle devices and iPads, would mean that the “myopic glow” of a computer screen would replace the “friendly pages of a book.” The article concludes that the internet was lacking human contact and that crucial factors in human connection would be “relentlessly devalued” in an online world, which is perhaps the only thing the author got right in his predictions. 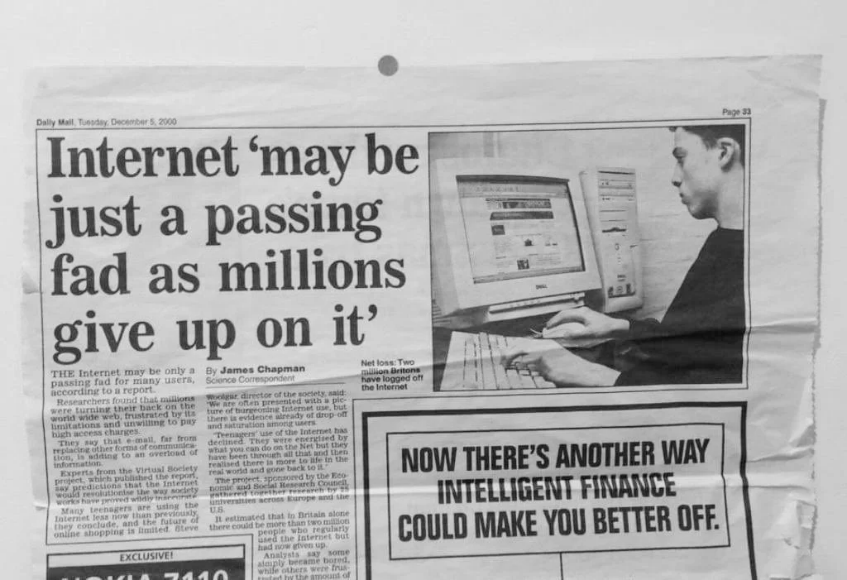 Of course, the article being from 1995, it was before Amazon, Google, Facebook, Kindles, iPhones, and a host of other technological developments that belied nearly every claim in the now infamous Newsweek piece. Funnily enough, five years later in December 2000, the Daily Mail Newspaper in the United Kingdom published a story calling the internet a “passing fad.”

Internet Law at the Dawn of the Online Age

The laws around telecommunications and electronic commerce are complex. Sometimes a company might take action that is recommended by a lawyer, but it comes back to haunt them from a public relations point of view. An example of this would be if a company is seen to be doing something anti first amendment (free speech.)

That 26-word section, according to Koseff, was instrumental in shaping the way the internet evolved by shielding online services and websites from lawsuits over so-called user-generated content. In essence, websites were then treated as neutral platforms for information rather than publishers of content, absolving them of potential legal liabilities arising from things posted on those platforms by third parties.

But the Communications Decency Act is just one piece of legislation making up an array of regulations that apply to websites and other online services. Although they’re said to be “outdated,” the United States also has the Computer Fraud and Abuse Act of 1986, The Digital Millennium Copyright Act of 1998, and the Electronic Communications Privacy Act of 1986.

The Computer Fraud and Abuse Act, according to Mother Jones Magazine, was spurred in the mid-1980s after the movie WarGames, starring Matthew Broderick, spooked lawmakers about the potential for hackers to start a nuclear war. During congressional debate on the bill, a clip of the movie was played in the house, and the law remains on the books to this day.

It makes unauthorized access to a computer network an offence under the act, but as the magazine pointed out in 2013, it could hypothetically make someone open to criminal prosecution for violating a website’s terms of service. In such a scenario, it could lead to prosecution for lying about your age on a dating website, for example.

But back in 2013, there was an attempt to amend the Computer Fraud and Abuse Act with the introduction of  Aaron’s Law, named after Reddit co-founder and activist Aaron Schwartz, who tragically committed suicide while facing decades in prison and large fines for violating the act. His violations were related to the illegal downloading and distribution of academic articles without authorization, which under the act’s “vague” language opened him up to both federal and state criminal charges.

The Electronic Communications Privacy Act of 1986 also contained a subordinate law known as the Stored Communications Act, which sought to protect people in America from having their electronic information and data released by service providers without consent.

It also prevented internet and phone companies from giving customers’ private information to law enforcement without a warrant. Since it was long before the days of cheap digital storage though, the act allowed for the hypothetical taking of archived emails after a certain time period without the need for a warrant, but rather just a subpoena, which doesn’t require the same legal rigour from police when seeking judicial authorization for a search warrant.

The law that still remains a source of great controversy and debate today, however, is the Digital Millennium Copyright Act of 1998. Said to be an attempt to modernize copyright law in the digital age, the DMCA, as it’s called, allows copyright holders to send take-down requests to tech firms like Google and Facebook for the removal of unauthorized content. Movie studios and record companies use it as a blunt instrument against online piracy, which exploded on the internet when file sharing sites allowed for the widespread unauthorized and illegal distribution of music and films.

But like the Communication Decency Act before it, the DMCA also contained a so-called “safe harbour” provision for websites where infringing content gets posted by users. So while sites like YouTube may host millions of videos containing copyrighted material, it’s the users who face the ire of copyright holders rather than the sites hosting the content.

Famously, the DMCA’s take-down provisions have been used to stifle teachers using copyrighted material in educational lessons, while also being used against parents who post videos of their children dancing to popular songs. In one case, for example, Universal Music Corp. tried to use the DMCA to remove a video of a baby dancing to a Prince song, though the child’s mother, Stephanie Lenz, eventually was allowed to keep the video up after suing the company.

The case of Lenz v. Universal Music Corp. eventually made its way to the Ninth Circuit Court of Appeals, which sided with Lenz and found Universal had sent YouTube a DMCA takedown request without properly considering that the video was a “fair use” of the company’s song. The ruling was touted as a victory for regular people who faced abusive “extrajudicial” takedown requests for harmless, non-commercial use of copyrighted material.

These days there seem to be even more laws added to ensure consumer protection and to fight against cybercrime. An example of this would be the Children’s Online Privacy Protection Act. Another example would be the legal issues that can arise when a telecommunications company doesn’t protect its internet users’ personal data.

One of the most significant Canadian laws regulating the internet came about in 2014 in response to the dubious distinction the country had as a haven for email spammers. Canada’s Anti-Spam Legislation, according to the federal government, came into effect in response to burgeoning piles of unwanted emails filling up Canadians’ inboxes. Calling spam emails a “significant social and economic burden,” the country’s anti-spam laws sought to stem the tide of unsolicited emails and text messages being sent that often contain malicious links and viruses.

According to the Canadian government, prior to passing the anti-spam law, Canada had seven of the world’s most prolific “spamming organizations.” But within three years, only two of those remained in the country. The country’s Spam Reporting Centre, meanwhile, gets more than 5,000 complaints a week about unsolicited emails, though spam text messages have become a big scourge of their own in recent years.

The legislation was apparently effective in significantly reducing the number of spam emails people in Canada received, while also reining in companies whose e-mail marketing schemes often indiscriminately sent out millions of unwanted email messages without regard for the people receiving them.

But while the anti-spam legislation has generally been seen as a reasonable and successful approach to combatting unwanted emails, it’s the Canadian government’s recent efforts to regulate online content that has stirred much controversy and criticism. The Trudeau government’s plan to combat “online harms” such as hate speech has been called a “serious threat to human rights in Canada.”

It would require social media companies and internet platforms to monitor user-generated content and take “reasonable measures” to weed out and restrict access to harmful content posted online. It would allow people to label content as “harmful” and give companies such as Facebook a day to determine if it’s indeed harmful and in need of removal. The proposed legislation threatens companies with huge fines for non-compliance, allowing for penalties of a percentage of a company’s global revenues or up to $10 million. According to Kogan, this could lead to Facebook getting fined more than $2 billion “per post.”

The proposed law also raises “serious privacy issues, since it would give the government more power to surveil citizens’ online behaviour. Despite the Charter of Rights and Freedoms guaranteeing the right against unreasonable search and seizure, the new law would give internet service providers the ability to monitor and store “potentially harmful content” and secretly send it to law enforcement without notice or a user’s consent.

For its part, the Canadian government claims the new legislation is part of its “overall strategy to combat hate speech and other harms.” While it acknowledges that social media platforms like Facebook, Twitter, and Instagram are widely used by Canadians to stay connected with family and friends, it also claims there’s a mounting body of evidence showing the dark side of social media and its “significant harms.”

The Canadian government’s online guide to the proposal points to “real-world acts of violence” that resulted from harmful online extremist content, including the Quebec Mosque shooting in 2017, and the mass shooting in New Zealand back in 2019.

Of course, whether it’s to be believed or doubted, the Government of Canada claims the new online harms laws would deter and lessen the harms done by certain content online while preserving privacy and freedom of expression.

You might also want to talk to your web devs about understanding the modernization of the internet and the principles of net neutrality.

Emerging new technologies always present governments with challenges about how to legislate and regulate their uses to minimize harm and maximize their utility. The internet, no doubt, has presented policymakers with the most difficult task of effectively regulating a global electronic network that grows and evolves every single day.

The rise of political extremism and the internet’s role in stoking societal divisions has set off alarm bells around the world, and lawmakers everywhere are now tasked with trying to tame a wild technological beast whether their efforts are successful, unfortunately, can’t be judged in the present, and it will likely be up to future historians to make that call.